This is taken from St Andrew’s URC Cheam’s Church Magazine (July / August 2016 issue) with the kind permission of the Editor and Laura Barker.

There were many tributes to Peter at the Service of Thanksgiving for his life held at St Andrew’s on Friday 3rd June 2016.  These are the ones from his family. 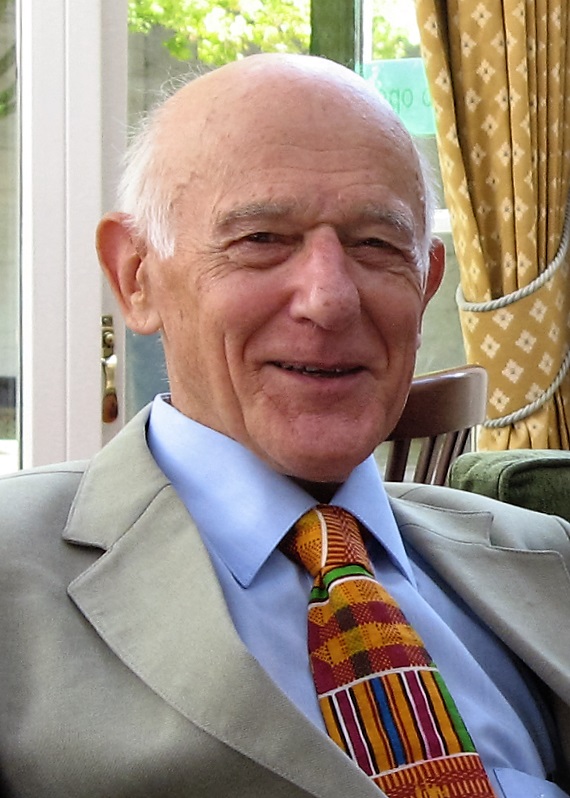 Peter was born at home in Feltham on 9th July 1928 to Fred and Alma Barker, who already had three sons, John, Ralph and Paul.  At age 11, he was accepted as a Winchester Cathedral choirboy where he spent the next three years.  After further schooling at St Edwards in Oxford, he did two and a half years’ national service in the army and was posted to East Africa. During this time, Peter began the practice of reading the Bible, a chapter a day, and would borrow the sergeant-major’s radio to listen to sermons broadcast from Nairobi Cathedral – one of which led him to make the decision to give his life to God.

On returning to the UK, he read History at Oxford and then trained as a journalist with a view to fulfilling the call he felt on his life to return to Africa to work for the Lord.  He duly did so – working as an editor for New Nation magazine for two years and then teaching English, French and History at secondary school for a further three years, until he felt that God was calling him to devote himself full-time to preaching the gospel.  He offered himself to the Presbyterian Church of Ghana and, following a year of part-time study in London while also working as a warden for the Alliance Club (a hostel for international students), he studied privately for his BD at Trinity College, Kumasi, in Ghana and was finally ordained as a PCG minister.

Peter and Laura had met some years earlier, at St Stephen’s Church in Twickenham, and were married in August 1963.  Returning to Ghana, now with Laura by his side, and having begun yet another lifetime’s passion – writing books – he pastored a church in Accra for three years, before spending several years as literature secretary of the Ghana Christian Council, which resulted in the founding of Asempa Publishers in 1968.  The family returned to the UK in 1985 and Peter and Laura spent eleven years ministering to four URC churches in Derbyshire, before moving to Cheam to support St Andrew’s, where they have been ever since.

(which, on the day, followed several other tributes)

To us, Daddy was that same enthusiastic, energetic and inspirational force you’ve already heard about – always inviting people to stay or at least have a meal, often without being able to let Mum know beforehand (we didn’t have a landline phone in Ghana, let alone mobiles!), always wanting to write a book or a leaflet or a paper on something or other; always working away late into the night and finishing things off at the last minute – he thrived on living on the edge, which often didn’t do much for Mum’s peace of mind.

He and Mum taught us to sing four-part harmony as a family, just for the pleasure of it, but sometimes performing for others rather like the Von Trapps, and music has continued to be a big part of all of our lives.  He taught us to read maps and would take us for walks, bike rides, or country drives – always finding the most obscure and least-established route so that we, unintentionally, ended up blazing a trail where others had presumably feared to tread.

He was incredibly knowledgeable – the result of a full and varied life, but also the fruit of study and hard work.  Wherever we went, he would regale us with stories about the history of the place, pointing out ‘interesting’ facts about the architecture or agriculture of the area – how he knew it all, I’m not sure.  And he knew about language – not just the English language, but French, Twi (one of the many Ghanaian languages), ancient Hebrew and Greek, Latin, Swahili and a smattering of others.  He would pick us up on our grammar or pronunciation – he was the archetypal editor, even of the spoken word – teaching us skills that have gone on to help me (Helen) in my work over the last 15 or 20 years.  Even from his hospital bed, he corrected us on a few occasions when our grammar was not up to scratch!  And whenever we played the Dictionary game – finding obscure words for which we’d all invent definitions and then try to guess the real definition – we would find a word that none of us knew, only to discover he knew it or could work out its meaning based on its etymology and we’d have to search for another even more obscure word.

Dad’s love for Ghana gave us a birthplace and an upbringing we will always treasure.  His sense of adventure caused us and so many others to do things we would otherwise not have done and go to places to which we would not otherwise have gone.  His passion for God and for people and his desperate desire for them to know Jesus was his driving force – he would preach in one form or another to people on any given opportunity, not just from the pulpit but at the bus stop, on a tube train, in a shop … giving us a wonderful example to follow and big shoes to fill!

And finally, if any of you raised an eyebrow at the fact that Dad died on Friday the 13th, fear not.  He was not remotely superstitious – he once needed a hernia operation and asked for it to be done on Friday the 13th, just to make the point that he was not at all concerned about the date.  The surgeon, knowing who he was about to operate on, asked Dad to lead them all in a word of prayer before going under the knife!  So … if there had been anything like a planning meeting between Dad and God to discuss the date of his leaving this earth, and he had seen that date approaching, you can be sure he would also have raised one eyebrow and, with a glint in his eye and a wicked laugh, he would have said ‘Let’s go for Friday the 13th!’  Although a sad day for us, it was the best day for him – finally going to be with his Lord.

Pregnant???
Alma Barker’s mouth dropped open.
This was not what she was hoping.
I’ve already got three boys …
John, Ralph, Paul … Imagine the noise!

With brothers who were ten years older,
His mum played piano, his dad sang louder,
Ralph just loved to make him laugh,
Peter had the perfect start.

When Peter reached the age 11,
His voice was like the sound of heaven,
He sang in the cathedral choir
In Winchester in sunny Hampshire

So, how did Peter get hooked on faith,
What did God use for his bait?
It wasn’t the Book of Common Prayer
But a radio preacher on the air.

In the army they called him Moses
What his friends did not suppose is:
This was more than a humorous name,
One day, Peter would speak in God’s name.

Now in Ghana at age 28,
He soon found he had a mate.
Laura met him at St Stephen’s
While he was on a holiday season.

Back in Ghana Dad learned Twi:
‘Maye komm Nyame hwe Onyame’.
He became like one of them!
Eating fufu and roast yam.

How my father loved God’s word.
He preached to many who’d never heard
This good news of a brand new start.
Who else can fix the human heart?

Dad read the Bible to us at home
At breakfast time while the porridge went cold,
But I was selfish, I knew best,
And so my life got in a mess.

But you guessed it, something changed
And now I preach to you the same –
Jesus gave his life for you –
It’s not religion, it’s not a game.

What is it then I hear you cry …
It’s a new family, it’s humility and by
The way it’s not to do with rules –
Who would go for that but fools …

It’s the beauty of a softened heart
Made alive to take its part
In loving folk as Jesus would
Unselfishly and always good.

It’s contentment as we really know
That our shoulders weren’t meant to bow
Beneath life’s pressures no, no, NO!
God wants to help, to take the load.

Dad’s last sermon, I hear you wonder –
Surely you have made a blunder.
You don’t know what he would say,
How presumptuous to talk this way …

But that is not entirely true.
Who gave me this verse?, not Dad but He who
Gave Dad every word he preached.
I received it, why don’t you?

Apologies, but there are no posts to display.